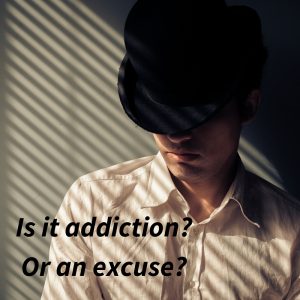 He says he’s a sex addict, but I think it’s an excuse. He’s just trying to get away with what he did by claiming it’s an addiction.

The idea is that the “sex addict” label lets him off the hook, renders him not responsible in some way, or gives him license to get away with something. Nothing could be further from the truth!

The risks taken by sex addicts that endanger their health, safety, livelihood and relationships are staggering. Some look for anonymous sexual partners through websites, chat rooms, or phone apps. They meet people they don’t know in places they’ve never been and have unprotected sex with people whose sexual history is completely unknown. They may literally risk their lives for the next sexual encounter.

Betrayed partners sometimes believe that when their unfaithful spouse is acting out, he’s sneaking around like an adolescent whose parents are out of town having casual hook-ups or engaging in other behaviors that he experiences as merely fun and harmless.

Addicts often minimize their behaviors or say that they “meant nothing” in an attempt to avoid consequences or manage shame.

Addiction is not casual, fun, or harmless.

The level of preoccupation, desperation, unmanageability and shame experienced by most sex addicts is so painful that they create distinct “compartments” to manage their dark, secret life.

No one would willingly chose to be an addict—especially a sex addict.

It is difficult enough for most people to talk about healthy sexuality, much less admit to out of control sexual behavior. Taking on the sex addict label requires a considerable commitment of time, energy and dedication.

A typical treatment plan for a sex addict in the first year is weekly individual and group psychotherapy, attending 12-step meetings multiple times a week, and working with a 12-step sponsor. If there are serious safety issues or the consequences of the behaviors are severe, in-patient treatment may be required.

Given all that’s involved in taking on the sex addict label, it’s clearly not an excuse for bad behavior or a way to avoid responsibility. Quite the contrary.

A person who identifies as a sex addict and makes a decision to get help to stop his behaviors is making a long-term commitment to treatment and recovery.

Survival Strategies for Betrayed Partners blog articles are protected by U.S. copyright laws, and may not be reproduced, distributed, or re-published without written permission of the author.